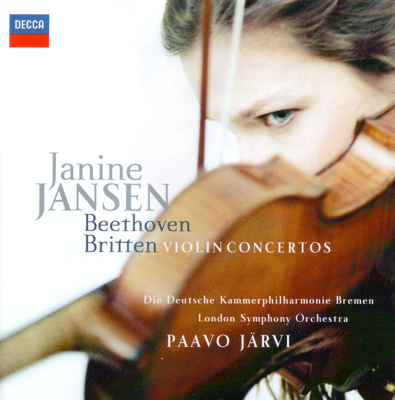 Beethoven Violin Concerto was first performed in 1806. Britten’s Violin Concerto first performed in 1940. These two concertos almost 100 years apart are very different in style. Yet both have an interesting commonality:  both in the first movement the music is led by timpani drum beats. I am not very sure but I find the recording artists seem to have paid special attention to the recording of timpani. As a result the timpani sounds clear and clean in the recordings.

The recording of this DECCA CD is not bad. Both were conducted by Paavo Jarvi. The accompany orchestra for the Beethoven Violin Concerto was Die Deutsche Kammerphilharmonie Bremen, an orchestra seemed using authentic instrument and thus with a lighter and clean sound but still supporting well with Jansen’s modern and warm playing style. She used the candaza by Fritz Kreisler.

Accompanying Jansen for the Britten’s Concerto was London Symphony Orchestra. Although it is a modern classical, it is pleasing to listen to. The music comes with three movements. First movement is stable, second movement lively. The last movement is the longest and heavy. The effect of the spanish civil war on the composer can clearly be heard.

I prefer Jansen’s style with the Britten Concerto. As for the Beethoven Concerto, there are already so many interpretations in the market, it is not easy to be outstanding in the first place, but Jansen’s interpretation does have some freshness in it.

Britten’s concerto has large mood swing, and is not easy for both the soloist and the orchestra. Last movement is the centre of gravity of the concerto. It is performed straight from the second movement without break with the violin long note. As the movement goes along the mood gets heavier and heavier. With the hopeless and silence timpani beats, the music ends tragic.